On September 21, 2015, at 10:56 a.m., then-candidate for President Hillary Clinton tweeted about ‘price gouging’ in the specialty drug market. By 4 p.m. that day, the entire Biotech sector had tanked. The iShares Nasdaq Biotechnology ETF (IBB) – which had skyrocketed nearly 300% over the previous five years – sunk 5% in the five hours from Clinton tweet to closing bell. The nine biggest losers on the Nasdaq 100 that day were all Biotech stocks, and the Nasdaq plunged into the red on a positive day for most other sectors.

Clinton’s tweet referenced a New York Times article that highlighted the drug Daraprim, the price of which was artificially inflated from $13.50 to $750 a pill by then-CEO of Turing Pharmaceuticals, and now-imprisoned ‘Pharma Bro,’ Martin Shkreli. But the article in The Times isn’t what moved the market that day, it was the Clinton tweet.

“We All Go a Little Mad Sometimes… ”

The Clinton tweet, and the subsequent 5% dip in the Biotech sector, illustrate a core attribute of today’s stock market: vulnerability to collective mania. Thanks to the vast array of social conduits at our immediate disposal (social media, 24-hr news cycle, digital publications, YouTube), a singular irrational bias can compound and amplify with such force that it triggers a mass panic episode. And since the compounding and amplification happens everywhere instantaneously, it outpaces the speed of human biological processing capabilities, which can’t possibly aggregate the endless variables and data sources. In other words, human intelligence is no longer adequate to make sense of the market.

To be fair, this phenomenon is nothing new. Humans and markets have been exposed to the vulnerabilities of collective mania for as long as there have been humans and markets (Tulip Mania, The Salem Witch Trials, The Macarena). What is brand new is the velocity and frequency at which these events are taking place. In the two years since that Clinton tweet, an abundance of collective mania events has impacted markets worldwide (Kylie Jenner’s February 2018 Snapchat tweet that wiped out $1.3B in market-cap is perhaps the most famous example). As these episodes become commonplace, investors are often left wondering: Do we really live in a world where a single tweet from a famous politician or celebrity can move a stock – or even an entire sector – up or down with such speed and alacrity that investors stand to make or lose millions in the blink of an eye?

The answer is a resounding ‘Yes.’ And once investors come to accept this stark new reality, an altogether different question emerges: Is there any way to predict the unpredictable?

From Soup to Nuts

To answer that question, let us first examine the growing phenomenon of ‘Unstructured Data.’ The term applies to the information that flows into our neural decision-making networks, and consequently amplifies our unconscious biases, which in turn impacts our decision-making. Previously immeasurable details like word choice, nuance, sentiment changes, and volume/frequency of keyword mentions all serve as a mirror for our collective behavioral patterns. Essentially, our collective unconscious is imprinted on the internet billions of times a day, and what we sorely need is a powerful and astute psychoanalyst capable of interpreting that unconscious and delivering sound, reasonable solutions.

In late June 2018, media outlets ran the story of Kraft Heinz (KHC)’s prospective takeover of Campbell Soup (CPB). As expected, Campbell’s stock soared on the news. Like any announcement, investors who wanted to capitalize had to be first-in after the story broke. Unless, of course, they could predict the story before it actually broke.

On December 19, 2017, at 1:01 a.m., Accrete’s Rumor Hound detected initial takeover chatter – a full six months prior to the mainstream media running the acquisition story. Rumor Hound even picked up ‘increased chatter’ beginning on May 21, right up until the time the story first broke in late June. The software predicted with 77% probability that CPB’s stock price would rise to within a given range over a 10-day time span. Those conditions were soon met, and Rumor Hound’s projection was validated.

However rational, a major stock move in the wake of a takeover announcement is a manifestation of collective mania (we can call it ‘rational exuberance’). Rumor Hound was able to detect the mounting exuberance as it developed online prior to its discovery by mainstream outlets. In such a scenario, investors could have used Rumor Hound to load up on CPB stock/options in expectation of a severe price move.

It goes without saying that the birth of modern portfolio theory took place prior to the digital revolution. As such, much of it was predicated on certain assumptions, first and foremost being that investors are rational. Of course, we all know this to be a fallacy, yet the degree to which rationality persisted within the market was enough that modern portfolio theory and its underpinnings could manage to hold true for decades.

That is no longer the case. Technology’s accelerated growth rate has led to a massive spike in idiosyncratic risk, which in turn amplifies the inherent irrationality of the market. As a result, funds that continue to rely on human capacity alone will miss out on significant alpha capture, while funds that incorporate machine learning will achieve drastically better outcomes over time.

Human intelligence has taken us this far... but if we are to mine the vast repository that is Unstructured Data, we must equip ourselves with tools that are capable of just such a feat.

For more on how AI and unstructured data are reshaping the investment landscape, check outNasdaq’s interview with Accrete Founder and CEO, Prashant Bhuyan. 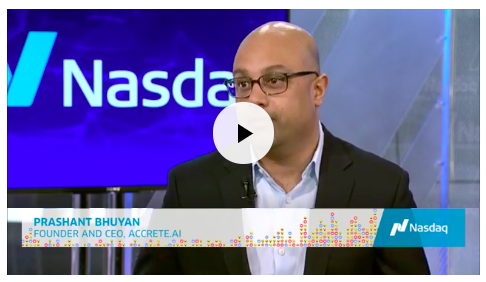